She jumped into the puddle hitching her long skirt a notch above her knees, unabashedly,  and

screamed with joyous innocence. Nikhil watched with unfounded amazement and wonder as how

a rural Indian belle could act in gay abandonment. The countryside wore a veil of orthodoxy. This

was his maiden tryst with her.

The verdant village life offered him simple pleasures that the urban jungle was devoid of. The

abundant foliage was a treat to his tired eyes. The grazing  livestock and the avian species  made

him realize the presence of other creatures on this Earth other than the two legged robots. The

gurgling water of the river tickled his feet giving him the feel of an expensive spa.The organic

managed to keep his body and soul together.


Passing by the plantain plantation , his eyes were arrested by a motley group of heads bent down

His curiosity carried him close and he bent down to see Vidya tutoring to the students, peasants

capacity of the soil. This soil further enhances the germination of seeds and increases the crop

yield". She held a small bunch of the crawlies with dexterity.

Her knowledge  in vermicultre added another layer of respect to her character.

choose to stay in her humble beginnings to pay it forward to the villagers . The lure of the lucre

did not attract her to a plush consultant job . He thought of his job back in the Hedge Fund

Company . The bottom line of the Corporate world was rapacious profits. The corporate timings

and travelling in different time zones made him a victim of  insomnia and depression. Yielding to

medical advice he took a break of three months.


After a heavy south Indian breakfast of idli-chutney washed down by fresh filter coffee, he and

his aunt sat in a bullock-cart. 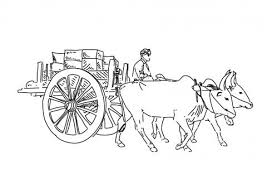 Vidya's school comprised of  daily wage earner's children . He was amazed at her dedication and

enthusiasm. She asked him to impart any knowledge or expertise he deemed fit to the children.


Her  affable , conviviality and altruistic nature won his heart. He secretly fell in love with her.

'Fell ' would be a very shallow word . He had arisen in her love and seemed to be floating and

basking in her sunshine.


Nikhil felt uneasy as his vacation was drawing close. He had another  four weeks to go. He

decided to speak to her.

He was shocked to see her pale, hospitalized lying in supine position. The lively Vidya had spring

in her heels and he couldn't believe this transformation.

" Will you marry me, Vidya?" he proposed shyly.

She smiled without any trace of coyness.

"Eight weeks is a long time to be a guest, isn't it? Return to your groove , Nikhil" , spurning the

marriage proposal. Her words stung his ego like bees. His heart couldn't face this vicissitude.

Nikhil was constantly at her bedside as many of the villagers were.

Vidya refused medical treatment preferring to the call of the higher forces beyond human control.

Nikhil was sure that Vidya's soul will find purpose again among her people.