Write Over the Weekend theme for this week

This time your entry must contain, ‘This time, she raised the bar…’ 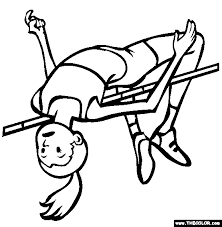 She looked at Ayesha and tried to search for any  trace of emotion of surprise. And there was none on the calm focussed face. She stood straight , her legs joined together , arms by her side , with the fingers pointing downwards. Her athletic body , of years of training had learned to take the rigorous regime of the sport. Never did Ayesha complain nor was she the cause of any complaint to her coach.

She moulded easily and perfectly as wet clay under the tutelage of her coach Anita.

Coach Anita , without her gaze shifting from her loyal pupil ,'This time, she raised the bar a notch higher than had been anticipated . But as usual , Ayesha's facial expressions remained unflinched and with a spring Ayesha broke into a sprint and  cleared the raised bar with a slight effort but landed smoothly.

Coach Anita puffed her chest with pride and inhaled a powerful draught of air.

She showed the thumbs -up sign to her pupil and Ayesha smiled. They packed up for the day. It was almost night. But Ayesha knew that the next day she would have to practise her high jumps more effortlessly. The Athletics Meet was exactly a month away.


The energy of the packed stadium was infectious but the competitive spirit was not lost among the participants. Äyesha Khanna" as the name was called, Coach Anita signalled her pupil to take her place.

The stadium roared as the cheers reached a crescendo.

The chief guest picked the gold medal from the tray and Ayesha bent down from her pedestal to lower her head to accept what she richly deserved.

The thunderous applause of the crowd added to the rich haul of the medal. But Ayesha had'nt heard a single sound , for  her eyes only rested on her mother and coach ,  Anita Khanna whose moist checks glistened with pride and passion.

Anita communicated to her daughter ,  through sign language ,  her fingers dancing in the air. Anita looked up at the Heaven and said , 'Jai Mata Di'.


P.S. :- Anita Khanna , an ex-athlete , had given birth to a dumb and deaf girl. Anita was asked to abandon the girl child due to the unfavourable sex and disability of the new-born. But Anita refused and walked out of her marriage to bring her daughter up , single-handedly.

Anita , this time , had met her expectations and had no regrets. Ayesha could not talk nor hear but her sport and talent spoke volumes and made people hear and take notice of her.

This is the work of fiction and any resemblances to persons or instances , is purely co-incidental.

Email ThisBlogThis!Share to TwitterShare to FacebookShare to Pinterest
Labels: tale, write over the weekend