This time Team blogadda has asked us to write a post which includes  ‘The only solace being, the secret remained.’


The first rays of the morning sun caressed my face sending warm flushes on my cheeks  and I could no longer linger in the bed . I got up reluctantly , yawning and stretching my arms.The clock struck eight . It was Sunday and hence was allowed the weekly luxury of getting up a bit late. This was the only sunny part of the holiday.

How I hated the Sunday lunch! Renuka Aati (paternal aunt) could come beaming and greeting us. Do not get me wrong. She is no mean lady but on the contrary she dotes on me , her only nephew. 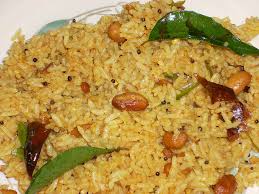 Amma (mother) would lay the table at the stroke of twelve and Re aati's bus would stop at our door with a loud horn as if heralding her grand arrival. Nothing has changed for the past fourteen years. She would come with her pot of steaming hot puliyogare (tamarind rice) and serve us with love and warmth. And this delicacy would be the cynosure of the house and served as a bone of contention between me and aati.

Amma 's puliyogare  too won hands down but appa (father) never praised amma's culinary skills and this propensity of appa hurt and irritated me to an extent of casting aati into the enemy camp.

The last six months saw a slight change in my behaviour. Whenever appa praised his sister's dish , I  made a valiant attempt to defend amma , praising her  but my voice was drowned in the bugle blow of appa's fond admiration of his sister's puliyogare and this exacerbated the situation. Amma tried to assuage my bitterness but it was a futile attempt. Appa blamed the surge of hormones for arguing with him.

It was a pure co-incidence that I stumbled upon aati's secret. I guarded it fiercely and waited upon a golden opportunity of spilling the beans. The week seemed to pass on lazily.

Sunday dawned and I got up earlier than usual , unable to control the excitement of a spectacle of Re aati's ignominy.

The minutes seem to stretch like hours and the hours to days. Amma caught me stealing anxious glances at the clock and she found my outward behaviour strange . Amma was notorious for getting into my thoughts and gauging my sinister motives.

She interrogated me in the absence of appa. Unable to hold back the secret , I opened my treasure trove and explained in detail how I would tear her apart.

Amma fondly caressed my hair and calmly said that she knew about the secret of Re aati's tasty puliyogare.
The  colour drained off my face. Why was amma silent when Re aati was showered wrongly with appreciation when her cook , Laxmi , was the person behind the tasty dish?

Amma explained to me that since Re aati had no family to shower love and affection, her sour rice dish bonded the family and amma would never deprive her of her share of her brother's love. At times it was necessary to ignore the truth. The knots of relationships had to be firmly secured. I saw amma's magnanimous heart behind a lie. I promised her that this secret would remain between the two of us.

We turned around to find Re aati standing behind.

She took my hand and asked me to let the cat out of the bag. I pulled her closer towards me , embracing her asked her to serve the Sunday lunch.

A small lie had triumphed , the only solace being , the secret remained , a closely guarded one.

After the sumptuous lunch amid laughter and bonding , I looked up in the mirror . I saw a thin line of hair sprouting above my lips. I am a grown-up boy now.


Read the other WOW posts here.

Email ThisBlogThis!Share to TwitterShare to FacebookShare to Pinterest
Labels: puliyogare, tasty, write over the weekend